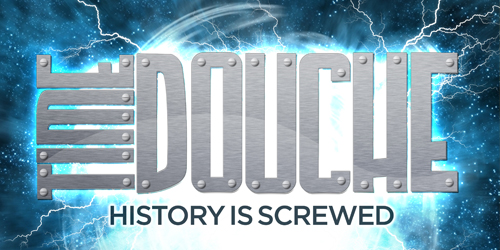 TIME DOUCHE CH. 2 - FIGHT YOUR WAY BACK!
By Steven Novak

“Get the hell away from Napoleon! Do you hear me you buffoon? Get away from him right now!”

It’s Nubleman. He’s screaming at you from your pocket and he’s apparently pretty pissed. Napoleon looks at you quizzically. His eyes drift slowly downward to the voice emanating from your crotch where his expression changes from confusion to revulsion.

“Pardon me,” He mutters while scratching his head, “but it seems there is a spirit haunting your genitals.”

Nubleman’s excited voice interrupts, “YOU IDIOT! GET AWAY FROM HIM NOW! YOU’RE THREATENING TO DESTROY THE VERY FABRIC OF TIME-SPACE!”

You don’t know what to do. Everything is happening so fast. Napoleon is eyeing your groin like it’s one of those stupid Sudoku puzzles your sister won’t shut up about; three very angry men are charging in your direction from behind; and that pompous son of a bitch Nubleman won’t stop calling you names from your pocket! Out of sheer frustration you punch yourself in the baby maker. Nubleman’s voice disappears with a crunch.

Admittedly, it’s not the smartest decision you’ve ever made.

No time to worry about that now. Three pissed off French dudes are less than fifty feet away, cursing at you from underneath elaborately curled mustaches and waving clenched fists in your direction.

Napoleon is still staring at your crotch, listening intently as the shattered piece of technology in your pocket hisses, pops, and occasionally sparks.

“Guess that killed the ghost,” you state with a nervous smile and half a chuckle. “I’m a regular Peter Venkman.”

He doesn’t get the joke. It’s not a very good one anyway.

With no time to run and nowhere to run to, you decide that you’re left with only one choice. It’s the worst choice and it’s the one with the absolute least chance of success. The only way you’re getting out of this mess is to fight your way out. This is the olden days after all, right? No one respects a pussy in the olden days. Time to knuckle up. Time to grow a pair.

Reaching forward, you snag Napoleon’s dueling sword. “I need to borrow this for a second.”

He lets it go freely and begins to slowly back away. Quickly leaping into the air you spin to face the charging Frenchmen and land in what you think is a “sword fighting” stance but looks more like you’re squatting in the bushes to drop a poop.

The first words out of your mouth are, “En garde, you ruffians!”

It’s stupid – stupider than your Ghostbusters joke even – which was pretty stupid.

Surprisingly, and for all the wrong reasons, it succeeds in stopping the mustachioed Frenchmen in their tracks. You begin flailing your sword, jabbing at the air and yelling “Ah ha!” over and over again. You’re not sure why you’re doing it. It looks stupid, but it somehow feels right.

The same as Napoleon minutes before, the confused eyes of Frenchmen drift slowly to your crotch. One of them removes his hat and scratches his head. Another begins to chuckle. Your nose catches wind of something – it’s smoke. Something’s burning. It smells like hair.

The sparks from the shattered device in your pocket have lit your pants on fire. Your sword goes flying and within seconds you’re screaming at the top of your lungs while hopping around and smacking your burning pubes in a vain attempt to douse the flames. Remembering that corny fire safety video you had to watch in the first grade, you stop, drop, and begin to roll. Turns out those videos were more accurate than you thought, because it works.

Breathing heavily you roll to your back and begin to chuckle. You did it. You’re alive and your most private of areas remains relatively unscathed. Black smoke is still rising from your pants. You really dodged a bullet this time.

Wait a minute, why are they speaking French again?

Propping yourself onto your elbows you look toward the three men and notice that they seem to be talking to each other rather than you. Half smiling and half confused, you aren’t sure what to make of the expressions on their faces.

“No me mire. No tengo cualquier cosa hacer con esto.”

That wasn’t French. That was Spanish. You took half a semester in Community College before flunking out – you’re eighty-six percent sure that was Spanish.

The universal translator – you must have broken it while rolling around.

The lead Frenchman – who happens to be the one with the largest mustache – shrugs his shoulders. “ดังนั้นสิ่งที่เราควรทำอย่างไร?”

What the hell language was that?

With an annoyed sigh, he pulls an elaborately decorated pistol from his side and points it in your direction.

“pItlh vam jIH 'oH” He mutters with a chuckle before pulling back on the trigger and blowing a hole in your head.

That last bit was Klingon.

Nubleman is such a nerd.

Posted by ChooseOrDie at 6:45 AM