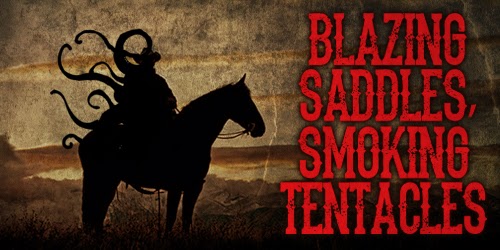 A tumble weed blows dramatically across the dusty main street of Mulder’s Lot. You grin at the cliched scene, taken directly out of the penny westerns stacked high in the tiny dusty room above the General Store you call both home and your control centre. You squint as grit blasts into your eyes, and untie the scarf which, until now, has sat fashionably round your neck. You’ve studied hard to fit into this town and although you’ve stayed longer than your posting normally allows, you find the inhabitants quaint and on occasions, interesting.

Pulling your felt hat firmly over your ears, you adjust the tilt of it in the General Supply Store window and made your way to the Grand Hotel for your customary late afternoon drink in the saloon, away from the noisier public bar. On your way, you nod to the preacher who is busy painting the church steps and exchange pleasantries with his wife. She stutters a greeting, but never meets your eyes. You’ve managed to fool most of the townsfolk, but you suspect she can see past your elaborate disguises and harbours a suspicion that you are not all that you seem to be. It may of course be your initial choice of body type which makes her uncomfortable, but you decide to keep a closer eye on her, as it wouldn’t do to be discovered.

The Grand Hotel glows with a friendly light in the fading afternoon sun. The sophisticated tinkling of the pianist’s tunes cuts through the suddenly still hot air. Crickets begin to sing alongside the musician.

Getting closer, you discover a crowd around the front entrance, all eyes entranced by the show taking place inside. As you push your way through the doors, you understand the silence, now mesmerised by the glamorous songstress slowly making her way down the staircase. Her song, simple and sweet, dripped of promise as she slithers around the room; lightly touching men’s hands or faces as she goes. She waves dramatically as she finishes her song and slips out through the swinging doors of the Saloon. You wonder if it is a good idea to drink there now.

The pianist strikes a lively tune, the hypnotic effect the songstress has had on the town folk immediately dispells.  You nod to the barman, who fills a tumbler with a pale liquor and sends it down the wooden boards. He gestures toward the Saloon. “Doc, you’d best take your drink in there. You know some folk don’t like it when you drink here.” He slides a small folded note towards you and winks. You pocket it to read it later.

You hear galloping horses up the dusty main street with a sudden halt further down the street. You already know it’s outside our office ,and from the banging on the door, the visitor is keen to employer your services. You gulp down the fiery liquid and prepare yourself for what’s to come.

Running feet down the street are followed by the doors of the hotel swinging open and the music stops dramatically. A bored group playing cards shift their eyes, hoping for new players, but upon seeing who it is, bury their faces behind their make-or-break, chance-driven selections from the grimy deck and try not to look up again.

The bucktoothed deputy’s eyes dart around the space and fix on you. “Doc, ya gotta come quick. We got ourselves and E - mergency"

You push yourself away from the bar and follow him down the street towards your surgery which also doubles as the town’s pharmacy. Sheriff Rogers, red faced from the exertion of riding hard stares at you for a moment.

You blush with both anger and embarrassment. You’d thought you'd managed to conceal yourself from the sheriff especially, and wonder again if it’s the body choice, or something else he means.

Your eyes wander towards his horse and the shape covered in a blanket and tied to his pack horse. A green tentacle peeps from under the blanket. This leaves no doubt what he means with his comment on “your folk” and suddenly you have a greater level of respect for the peacemaker of the town. You nod, and between the sheriff, the bumbling efforts of the deputy, and yourself, you manage to drag the body into your office and up onto the table.

You look at the deputy and raise an eyebrow at the sheriff. He shrugs and taps his head. “Aint nothin' much up there, and we are gunna need the help.”

You stare at the sheriff. “What do you mean?”

The sheriff pulls the blanket away from the body, revealing a human form attached with a distinctly scaled tentacle, charred and battle torn.  “I don’t mind you folk mosying round the plains, but when you start to fight, it just gets dang messy.” He points to the prone figure. “And when you don’t change back properly, it just leaves questions, which I normally gotta clean up.”

You lean on the table, unable to fully comprehend how you’ve misread the sheriff.

“Now there are a few more up near the old gold mine hiding out, most likely beat up but not injured like this one. You gotta tell them to move on. It’ll come better from one of their own folk.”

The figure stirs and groans. Apart from some laser burns which you know will heal within a few hours, the alien is in good shape and will just need time to regenerate and reform into human shape.

You have some choices to make?

A: Remember the folded paper from the hotel and find that it’s a handwritten note from the songstress, desperate for your help, and leave the alien with the sheriff and find out what she may need?

B: Decide to wait with the groaning figure on your table and find out what they are doing on your part of the planet?

C: Go with the Sheriff to reason with the aliens in the gold mine?
Posted by ChooseOrDie at 7:07 AM