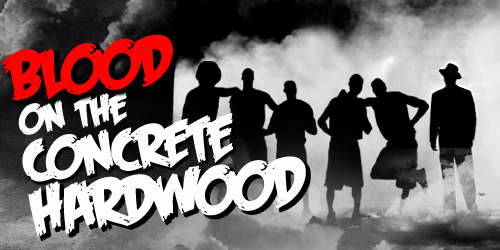 BLOOD ON THE CONCRETE HARDWOOD CH.7 - THE NEW FASHIONED WAY
By Rashelle Workman

It seems impossible, but your gut’s telling you the fancy-fingered globetrotters, those guys you were counting on to help you solve this case, are involved. Maybe even the crazy mofo’s who’ve been killing the girls and keeping their insides. Sick. Sick. Sick!

How’d I miss the signs, you wonder, smacking your forehead.

Rage fills you. The idea of being duped and played like one of their basketballs rips through your brain, until you scream. “Aaaaaugh! It’s time for answers.” And you’ve got a plan.

Digging through Kareem’s tremendously large trunk of trinkets, you find a full body disguise. With a quick look around the alley, you strip and don a suit that looks remarkably like Clive, the Trotter’s old coach. Once you’re squished in, you search the trunk for a mirror. You’ve gotta check out your new face.

Amongst all the hairy wigs, dentures and masks, you notice, at the very bottom, a small red button. It seems to be screaming: “Push me! Push me!”

And suddenly the trunk and the ground underneath you begin to tremor. It looks like the whole place is shaking. “Holy earthquake, that button broke the Universe!” The words sound ridiculous floating away on the sour smelling wind, but you’re freaked.

There’s a twinkle and then the shaking stops. Relieved you turn to bolt and notice you aren’t in the alley anymore. Instead you seem to be inside a glorious, glamorous hallway.

The maroon carpet under your shoes feels plush, the walls have been wallpapered gold and maroon. Unable to help yourself, you place a hand against the wall. It’s soft, like crushed velvet. The ceiling is high above you and expensive chandeliers dangle every five feet. The hallway seems to go on forever.

Going for your gun, you reach into the holster. When your hand finds emptiness, you remember you aren’t wearing your clothes anymore. You’re wearing Clive.

Shuddering, you say, “On my own, just the way I like it.” The tremble of your bottom lip begs to differ. You’ve been in some crazy-assed situations in your life, but this wins—

“Hey, I thought it was my turn to feed her.”

You move toward the sound of the voice somewhere up ahead.

Part of you wants to shout for help. But experience has taught that announcing your arrival before you know where the hell you are, is a bad idea.

Instead you listen, searching for the whereabouts of the voice. Snooping’s your job. Quickly you’re rewarded. There’s screaming, laughing and arguing. It sounds like a party. And the Trotters are hosting. Here . . . wherever here is.

On your left is a door. Placing your ear against it, you eavesdrop.

“Hang on. I’m going to go check on Kareem. He should’ve been here already.”

The door swings open and you fall into Curly, knocking him and you to the floor.

“What the hell? Clive?” Curly says, pushing you off.

The other Trotters come over and two of them help you to your feet.

“Cllliiivvvvve. Right,” Sweetwater says, punching you in the gut.

Two of the Trotters take one of your arms in their hands and drag you over to a wall full of water. Yeah, that’s right. It’s a fish tank the size of a wall! If you weren’t so freaked you’d think it was awesome. The damn thing is full of fish, dolphins and . . . Sharks?

“What the hell’s going on guys? What are you playing at?”

Three girls appear in the tank, their hair floating around them. Pointed teeth exposed cruelly as they wave at you. One of them points a finger at you and then curls it, beckoning.

Your mind tries to reject what’s in front of you. Because the girls in the mermaid suits look a lot like the dead women with the missing insides.

The Trotters start to laugh.

“You should see your face.”

“Yeah, let’s see his face.” Curly rips off the mask.

You breathe a sigh of relief. Within the mask stank of cement glue.

“Again, what the hell guys? I thought we were supposed to be working together to solve murders. These girls . . . why aren’t they dead?”

Twiggy continues, “Look friend. The tricks. The stunts we pull on the court. It takes a certain kind of . . . magic to do what we do.”

“Maybe we should demonstrate.”

Twiggy and Curly take you over to a door. Sweetwater pushes it open. Your socks are knocked off at the smell. The ocean. You swear you can even hear seagulls. The Trotters drag you up the stairs and stop at the top.

The mermaids are waiting for you.

“They’re gonna take you to meet our boss. Don’t struggle and you might get to come back. Got it?”

“Don’t do this. I can’t swim,” you whisper, a new kind of terror stealing through your veins.

They toss you in. And before you even have a chance to fight, the mermaids have you in their clutches and are dragging you down. There’s another door and one of the girls knocks. It opens. The girl to your right smiles.

And then they shove you in.

The room smells damp, but it’s dry. Your body is on solid ground. A drip-dripping catches your attention, but it’s too dark to see anything.

“Welcome. I’ve been waiting for you,” a voice growls.

Something hard splits your chest, grabs your heart and tears it out. Strangely, you still feel it beating.

“The boys will get five years of magic for you. Score!” The deep voice rumbles, like the Earth itself is laughing. “Let’s make the Trotters’ day and send you back as a crab.”

“Score,” you think as you’re tossed into the tank. One of your large pincher smacks you in the eye.

Posted by ChooseOrDie at 8:47 AM